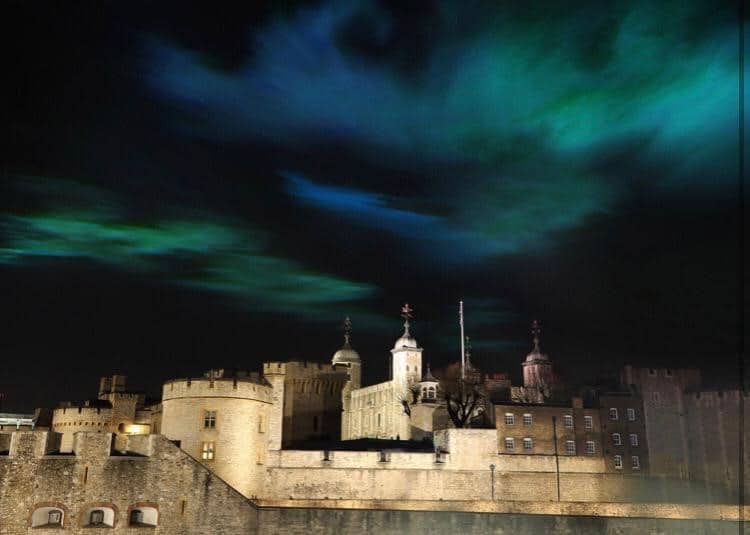 Huawei laser display over the Tower of London

To mark the upcoming launch of the new Huawei phone device, our aim was to bring one of the world’s most sought-after natural phenomenon to London.

The camera on Huawei’s new phone takes the highest quality images in low light, we needed a product launch to bring to life the brands strapline that they make everything ‘humanly possible’.

Working together with Dan Archer and his team from Germany we set out to bring the Northern Lights to London in a new installation for a limited time only. This 3D installation would be created using haze and laser projection and it would go over the heads of visitors passing by.

After substantial research for a venue, which not only had to have the right setting for this display, but also allowed such a projection, we found the ideal venue. The projections were to take place over the Tower of London. This provided the perfect setting due to the high footfall of the location being a London landmark.

The event was live for three nights, evening one consisted of a large media marquee – this was fully branded to the client’s new product. Guests arrived and were able to enjoy food and themed cocktails along with testing out the brand-new phone for themselves.

The following two nights were open for the general public to come along and see the Northern lights experience for themselves. Brand ambassadors were also available during these two nights for the viewers to test out the new device!

How we added value

The Uptown Events team made sure to involve the client’s thoughts and ideas into every aspect of the event design and planning stages. We were the liaison between the client, venue and various suppliers prior and during the event, which enabled a stream of information from both sides that kept everyone involved in the loop.

This was continued throughout the event days by liaising and managing logistics of suppliers, making sure everything was delivered and set with plenty of time.

The product launch proved to be a huge success. The event ran smoothly and according to plan, with crowds of people coming across the 3 nights and the launch gaining a vast amount of media attention for the new product.