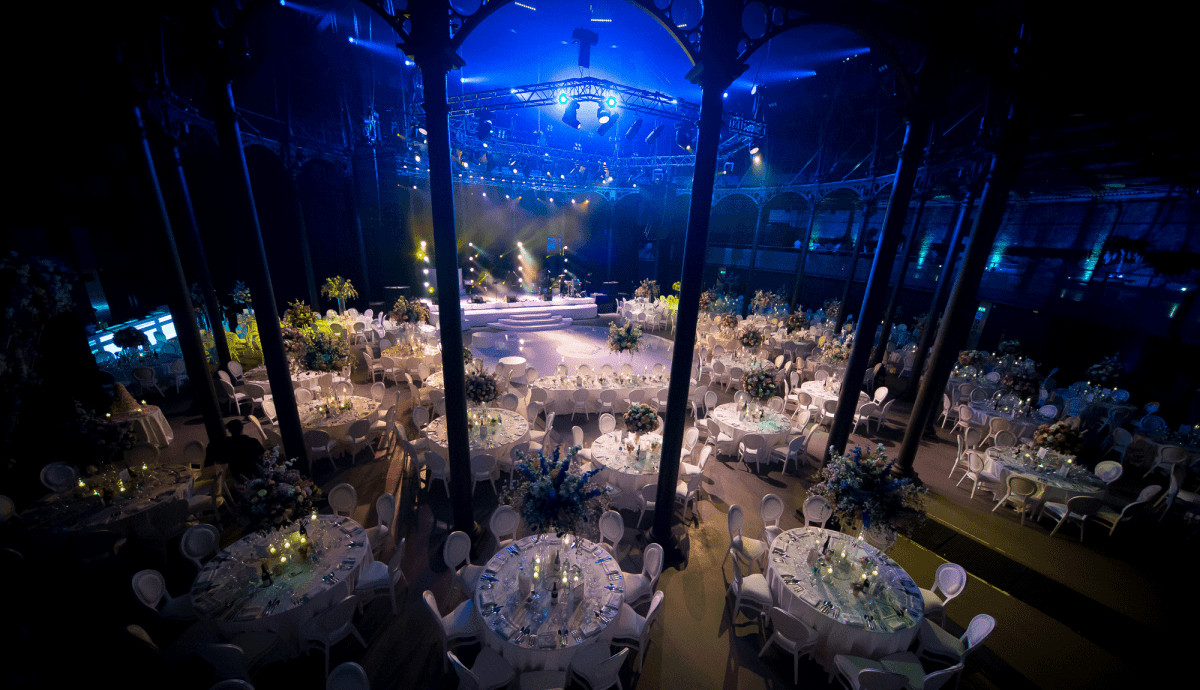 English Garden Wedding at the Roundhouse

The Venue
The Roundhouse in Camden

The Party
Two contorted Willow trees outside the front entrance were the guest’s first clue of what was to come when they entered the venue. As they continued inside, the staircase leading into the reception area was decorated with arching willow trees dressed with suspended lanterns, bird cages and purple hydrangeas. At the top of the stairs were giant light up letters covered in flowers which spelt out the hashtag of the event highlighting where guests had to pick up their escort cards from. Once guests had picked up their escort cards, they were directed onto the balcony where the reception was. Guests were able to get a sneaky glimpse into the main room and get an idea of what was the come later in the evening. The lighting was kept low in the main space so as not to give too much away.

Once everyone had arrived, and enjoyed some drinks and canapes, the lights came up on the main space and suddenly four violinists appeared on podiums around the dance floor. They played five dramatic pieces of music as guests made their way downstairs. The bride and groom made a theatrical entrance with a procession of drummers and a traditional Greek band and everyone joined in on the dance floor to help them celebrate!

During the fantastic three course dinner, guests enjoyed music from the Greek band, folk singer Emma Stevens and music from the DJ. After dinner was when the party really started! Guests enjoyed traditional Greek dancing, the cutting of the cake and even a ‘rave’ set where all guests were given glow sticks. To keep them going into the early hours, late night food appeared at midnight in the shape of a Laduree macaroon cart, a personalised sweet display and pulled chicken baps. Drink was flowing throughout the evening and almost all guests stayed right through to 2.30 in the morning to party the night away with the bride and groom.